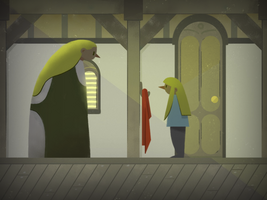 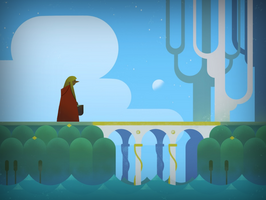 This game was made 4 years ago to demonstrate the new flexibility of version 3.0.0 of the Elm Narrative Engine.  (That engine is now up to version 6.0.0 with many expanded feature).

The Elm Narrative Engine is a tool for building  non-linear interactive story games, by creating a manifest of game entities, and a rule-book to describe how the story world should change as the player interacts with it.

The two main features of version 3.0.0 that are demonstrated here are custom views, and a shift to the Entity Component System pattern.  These features allowed games made with the Elm Narrative Engine to be much more flexible, extendable, and embeddable into other systems.

To demonstrate custom views, I made the same game in multiple formats, including this 2D point and click, a top-down rpg style, and a text-only style.  This 2D side-view version really shines, thanks to the amazing artwork of Samuel Herb.

This game makes heavy use of the ECS pattern by adding components for sprites, sprite positions, and sprite variations.  These are in addition to the narrative component used by the engine itself.  This allowed me to include all the data I needed to render and animate the very entities handled by the narrative engine.

The attached YouTube video is the presentation I gave at ElmEurope 2017, which goes into much more detail.